In recent years, Lao Cai province has developed into a promising destination for foreign investments – especially in the tourism, construction, and agriculture sectors. This is partly a result of Lao Cai’s strategic location located on the Kunming-Haiphong economic corridor, sharing a border on the Yunnan province of China.

Lao Cai is now a major conduit for trade and investment between Vietnam and southwest China. Businesses with interests in both Vietnam and China should examine Lao Cai’s profile in greater detail to understand if locating in the province will provide a strategic advantage in comparison to other locations. 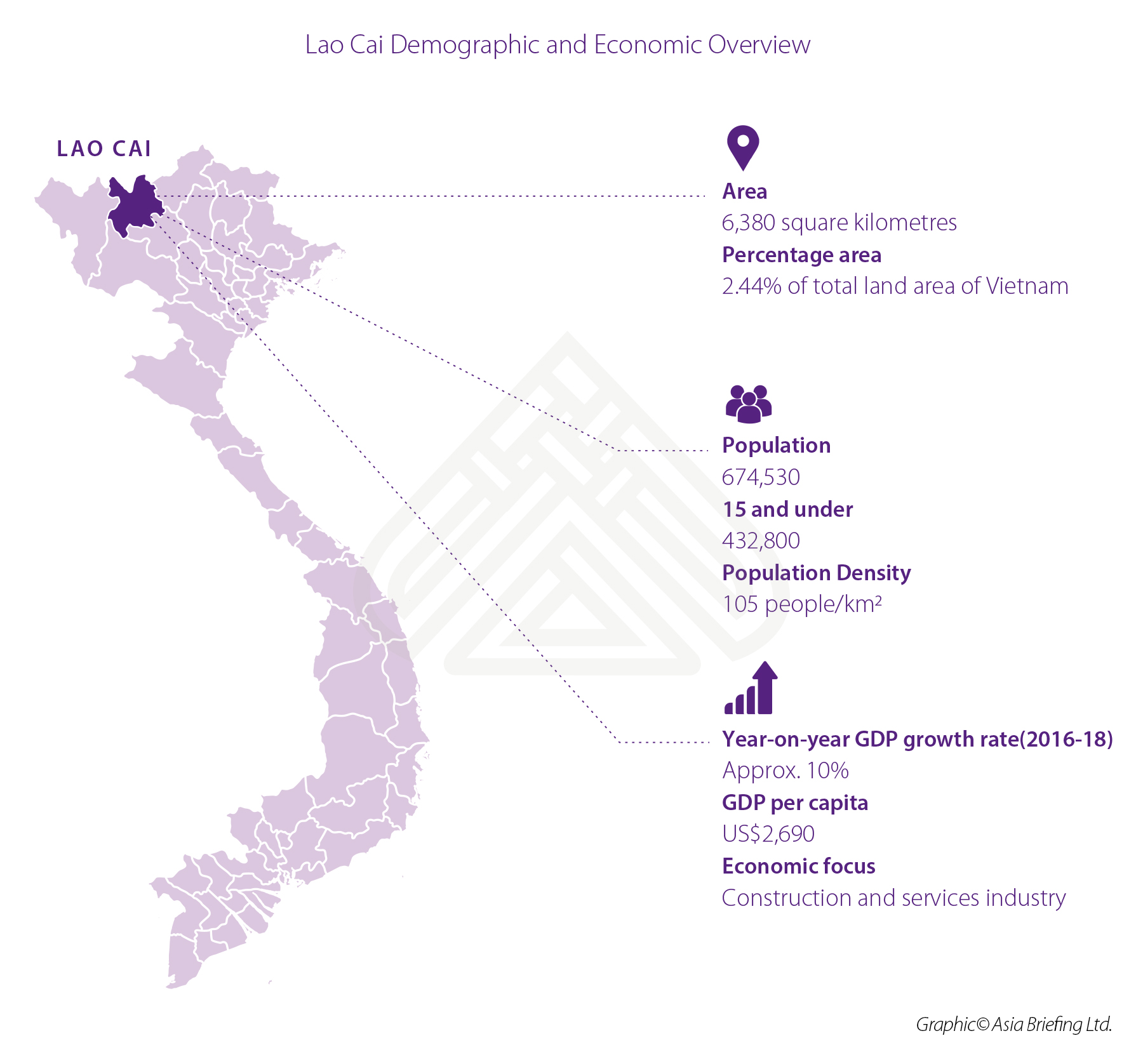 Still, the province is not for everyone. While the province’s growth prospectus is positive, investors will need to manage challenges like the poor state of infrastructure. Other challenges may include the accessibility of land, information access for businesses, human resource quality, and the quality of business support services.

Businesses that are able to manage these challenges to reap the benefits of the province’s strategic location and economic growth can win first-mover advantage.

One of Lao Cai’s strengths is that it has a better transportation network compared to other mountainous provinces. There are five national highways – including national highways No. 70, 4D, 4E, 279 – and two rivers running through the province. The 152 miles (245 kilometers) Noi Bai-Lao Cai expressway shortens the traveling time between Lao Cai and the country’s capital Hanoi from seven to three and a half hours.

Other routes and transportation networks like the Hai Phong-Hanoi-Lao Cai corridor and China’s Kunming-Hekou railways help facilitate trade in the Kunming-Lao Cai-Hanoi-Haiphong economic corridor, an important free trade route and gateway of Vietnam to ASEAN countries and China.

The economic corridor connects a string of economic centers in Yunnan and northern Vietnam. The volume of goods transported between China and the Haiphong ports account for 25 to 30 percent of the total cargo. With improving infrastructure and transportation networks in the economic corridor, there has been a growing demand for freight services between the regions in recent years.

The nearest airport to Lao Cai is Noi Bai International Airport at 145 miles (237 kilometers) in Hanoi. However, a proposal to build an airport in the tourist hub of Sa Pa, Bao Yen was submitted earlier this year by the local government. The Sa Pa airport will be built according to the International Civil Aviation Organisation (ICAO) standards and have a designed capacity serving 2.5 to 3 million passengers every year.

While the province is seeking investments and funding from different sources like Vietnam Air Traffic Management Corporation, the state, and provincial budget, it’s also seeking investments from private investors in the construction of civil aviation area and fuel depots.

The provinces’ key industries include construction, services, and agriculture. We examine these in greater detail directly below.

The province is one of the richest in the country in terms of its mineral reserves. It has up to 35 different types of high-quality minerals, with around 150 mines – making it a competitive choice for mining and processing investments in Vietnam. Some of these reserves include apatite (2.5 billion tons in Cam Duong), iron (124 million tons in Quy Xa iron mine), copper (53 million tons in Sin Quyen mine), gold, graphite, and more.

Many mineral reserves in Lao Cai are already under deep processing. For example, more than three factories are processing apatite ore with a capacity of extracting 100,000 to 700,000 tons per year.

This year another notable construction investment in Lao Cai has been the hydro-plant project investment worth of US$35 million from a joint venture between the Northern Power Corporation and China’s Yunnan Power Grid Co.

Last year, with over 718,500 foreign arrivals and US$582.8 million earnings from its hospitality sector, the province has shown great prospects for investments in tourism and services.  Sa Pa, Bac Ha, and Bat Xat districts, along with the Lao Cai city, are the most visited locations. Sa Pa alone saw 7,600 foreign arrivals last year. This year, the province expects to receive around five million tourist arrivals with 900,000 coming from foreign countries.

Lao Cai, apart from being home to a picturesque natural environment, is also home to 25 different ethnic groups with festivals and events all year round. For example, the Bac Ha temple festival in Bac Ha district and the Long Tong festival of the Tay ethnic group in the spring.

This article is produced by Vietnam Briefing, a premium source of information for investors looking to set up and conduct business in Vietnam. The site is a publishing arm of Dezan Shira & Associates, a leading foreign investment consultancy in Asia with over 27 years of experience assisting businesses with market entry, site selection, legal, tax, accounting, HR and payroll services throughout the region.