Established in 2010, D.K. Avgitidis & Associates Law Firm is a leading commercial law practice that emerged from the Law Office of Dimitris K. Avgitidis, Professor of Commercial and Business Law in the Law Faculty of “Democritus University of Thrace”.

We provide a complete and thorough range of high-quality legal services, including advisory work, legal advice, litigation, arbitration, legal opinions and business negotiations in the areas of business, corporate and commercial law. The Firm is specialized on company law, capital markets law, insolvency and restructuring law, commercial contracts, EU & Greek competition law, M&As, regulated markets and consumer protection law. It caters to the needs of a diverse clientele in and outside Greece composed of national and multinational businesses, small and medium-sized enterprises (SMEs), associations, credit institutions and public authorities.

Our team is equipped with skilled professionals with academic and post graduate specialization and extensive work experience.

Our objectives are to respond directly to our customers’ needs, to build relationships based on trust and to provide pragmatic, business-oriented and effective solutions to complex legal issues.

Dimitris Avgitidis is managing partner of our firm and a Professor of Commercial Law in the Law Faculty of ‘’Democritus University of Thrace’’, where he teaches Capital markets law, bankruptcy and rescue law, competition law, corporate law, insurance law and consumer protection law in undergraduate and postgraduate level.

Since February 2013, he has been teaching the subjects of Modern Business Transactions and Insolvency Law in the National School of Judges.

At the European Level, he acted as representative of the Greek State (Ministry of Justice) in UNCITRAL (Working Group V, Insolvency) from 2015 until 2019. From January 2017 until January 2019, he had leading role, as a legal expert, in the working group of the European Council on the EC Proposal Directive on preventive restructuring frameworks, second chance and measures to increase the efficiency of restructuring, insolvency and discharge procedures (now EU Directive 2019/1023).

He was Dep. Chairman in the Working Group of the European Council for the amendment of the Insolvency Regulation no. 1346/2000 (now EC Regulation 848/2015), (January 2014 until June 2014). From October 2013 until March 2014, he participated in the preparatory works of the EC Recommendation on a new approach to business failure and insolvency (EC 135/2014). From January until June 2003, he was President of the European Council’s Working Group on the European Directive on takeover bids (now Directive 2005/25/EC). He is a member of the Academic Forum of INSOL Europe, the leading European organization of professionals who specialize in insolvency, business reconstruction and recovery. He has, also, served on several legislative committees in the field of capital markets law, company law, competition law, insolvency law, energy law, consumer protection law and insurance law.

He is the author of the books: “Capital markets Law” (2nd ed., 2019), “The listed company” (2nd ed., 2013), “Corporate rescue” (2011), “The listed company” (2008), “The underwriter’s responsibility in Consumer Protection Law” (2005), and “Groups of Companies: The liability of the Parent Company for the Debts of its Subsidiary”, (1996). He is also the author of numerous studies and articles in corporate law, capital markets law, competition law, consumer protection law, insolvency law and he participated with lectures in several congresses on the above subjects.

He studied in the Law Faculty of the University of Athens (1982-1986) and he received the title of Doctor of Philosophy (Ph.D.) in Law at King’s College, University of London (1990-1993). His PhD Thesis on “The Liability of the Parent Company for the Debts of its Subsidiary”, was carried out with a scholarship by the Foundation “ALEXANDROS ONASIS”. He has acquired a Master’s Degree (Master of Law) in International Business Law from London School of Economics (1988-1989), a Master’s Degree in Economics from the Guildhall University of London (Master of Economics, 1989-1990) and a Stockbroker Representative Diploma in London Stock Exchange (Certificate of Registered Representative). 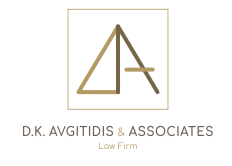