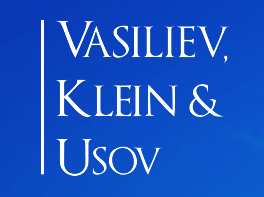 Vasiliev, Klein & Usov is successor in interest of Hellevig, Klein & Usov, which was founded in 2005 and consists of  4 partners, 2 Of Counsel and 4 Associates

Vasiliev, Klein & Usov,  provides Western-compliant legal advice that empowers clients to achieve their business goals and maximize shareholder value. We strive to help companies to understand the legal framework that affects their business operations in Russia.

Prior to founding Vasiliev Klein & Usov, American  attorney Daniel Klein (also a Canadian citizen) was a co-founder of Podolsky Vasiliev & Klein. He was formerly a co-founder of the Hellevig, Klein & Usov, Avenir Group (some Avenir companies are now referred to as Awara). Prior to founding Podolsky Vasiliev & Klein, Daniel worked at Marks & Sokolov which was the successor firm to Egorov, Puginsky, Afanasiev & Marks. From 2009 till 2012 Daniel served as a member of the board of directors of some subsidiaries of PPF’s/Generali’s Eldorado Electronics, NSK, Sibzavod, etc. Daniel was also Marketing Director for Sprandi sportswear.

Daniel is an expert on legal issues relating to Western companies doing business in Russia and Europe. Daniel also served on the boards of many Russian-based companies including: Actis Software, Skate Financial News to name a few. He has spearheaded the legal and business aspects of numerous company start-ups, venture capital/private equity investments, and geographic expansions of companies through acquisition and organic growth. Among other highlights in Daniel’s experience includes his serving as the EMEA MD for the then 2nd largest payment terminal manufacturer in the world: Hypercom (formerly NYSE: HYC; recently purchased by Verifone). As head of EMEA he managed offices in Dubai, Moscow, Budapest, Paris & England.

Daniel also was a filtration officer for the Vienna-based Siemen’s Red-Stars.com which purchased many internet e-tailing start-ups across Eastern Europe and Russia. Daniel also has extensive experience in the areas of real estate, franchising, mortgages, financial leasing, company structures, and contract law. He is a seasoned intellectual property attorney, experienced in litigating and prosecuting patents, trademarks & copyrights, especially pertaining to counterfeit goods. He has also practiced at the Paris-based firm Bouju Derambure Bugnon and New York-based Pennie & Edmonds (later partially merged with Jones Day). While working at Pennie & Edmonds in New York he was the lead trademark attorney for some of the firm’s sport clients including Australian Rules Football, the NBA and also worked on many NFL trademark matters. His main function was to oversea global trademark filings and prosecutions, product licensing matters, new sport franchising (Miami Heat, Charlotte Hornets, Minnesota Timberwolves), as well as to pursue counterfeiters around the world.

Daniel has been very active in Russia for many years and currently resides in Moscow. Daniel holds a Juris Doctorate (New York Law School), an MBA (London Business School) and a Bachelor of Science in Mechanical Engineering degrees (Washington University in St. Louis; with a focus on metallurgy and turbine technologies). He passed the State Bars of New York, Massachusetts, and passed the United States Patent & Trademark bar.

Daniel used to run the first and only English-language monthly legal column referred to as “Daniel Klein’s Legal Line” in Russia’s Passport Magazine (www.passportmagazine.ru). Daniel also used to teach Securities Regulations at Moscow’s Pericles Law School. Daniel is also a lecturer at Skolkovo’s start-up academy. Daniel has co-produced a TV program for Carlton TV (the UK), appeared as a guest on SkyNews program which he organized and produced (“The Cash Point Ghost”), and has had numerous other appearances on Russia Today, as well as many interviews on Business FM and other radio stations. Daniel is a citizen of the US and also a citizen of Canada and speaks English (as his mother tongue), French, Russian, Czech and Spanish.